From K-pop to cartoons, sport and crime, podcasts have proliferated our psyche in the last few years.

But cast your minds back to 2004 and the word ‘podcast’ had only just hit the digital atmosphere. Whilst it may seem incongruent (considering radio’s long and winding history being a very similar audio medium), it seems the rise of podcasts has slowly and exponentially boomed, with over 500,000 pods now on the Apple Podcasts platform.

“But what is so ‘revolutionary’ about podcasts?” You may ask. “Why aren’t you wowing me with an amazing new, high-tech, 3D virtual reality, secret platform that nobody knows about that is basically impossible to produce and too hard to think about?” Well… that’s exactly it. Therein lies the pod-ticularly fabulous thing about pods. They are easy to make, cheap to produce and easy to distribute. Couple this with our on the go lifestyle where we want to have our brains constantly jibed by information PERSONAL and INTERESTING to us, together with the human need for storytelling, and a little nugget of gold is born right there.

Plus, with no editors to convince, no producers to pitch and no green lights to be green-lit. You can say ‘ON AIR’ practically anywhere. 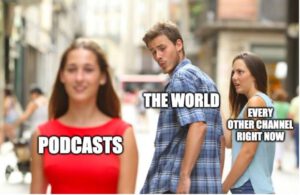 Podcasts actually go back to the 1980’s, and were initially called ‘audio blogging.’ Similar to early bloggers, this was a way for anybody to share their experiences and thoughts with other people. However, due to a lack of means to distribute the recordings, it took another 20 years before the genre took off.

Then in 2004, Ben Hammersley, an editor for The Guardian, coined the term simply because his editor needed one more sentence to fit the piece. His description of this revolutionary new audio distribution technology (which could now actually happen because of that thing called the Internet) ?… Podcasting.

Out of three descriptors, the second word stuck. “I just made up a bullshit sentence,” said Hammersley. “Honestly, I don’t really even remember doing it.”

But whilst the term was coined, it would take at least another decade more for the podcast world to burn our ears off. What was the flame that ignited it? Serial. Seriously.

In 2014, This American Life dropped the first season of Serial, which in turn became a pop-culture phenomenon and kicked everything into overdrive. The years following the late 2014 moment saw an insane flurry of podcast activity. Now worldwide, THERE ARE OVER 500,000 PODCASTS AND COUNTING ON APPLE PODCASTS.

DID YOU HEAR THAT!!?

Yes, good, hope you did.

Power of the pod.

Stats according to ABC’s OzPod 2019 Survey:

More than 30 per cent of Australians are listening to a podcast monthly.

Podcast listening still skews younger, with the majority of listeners in the 25-44 age demographic. Those listeners are hungry consumers. They claim to listen to six podcast episodes and four podcast series a week, and listen, on average, to 80 per cent of each episode.

That makes podcasting one of the stickiest mediums with a highly engaged audience.

This is the most popular way to get your brand in a podcast and also the most effective. Listeners are invested in a podcast, engaging with the hosts and listening intently to the content, which includes your messaging! So you’re reaching a niche, engaged market. It’s your brand in their ears!

Other ways to advertise in podcasts include:

Alternatively, if you’re just looking to purchase a standard ad slot and already have an audio clip, some tools allow you to purchase space and target ads to appear on multiple podcasts.

For example, if you’re planning to target one or two simple native ads to millennials on Spotify, you might want to use Spotify Ad Studio to create and launch basic native ads on the music platform.

The more podcasts and listener-ship continues to grow, the more companies will look to generate even further income from the platform, closer to what mainstream mediums such as TV and radio produce.

Developments in AI (Artificial Intelligence) integration which assist with personalising the ad experience are increasing by the day, and consistent efforts are being made to build upon content recommendations to further enhance the audio experience.

But in all the change and diversification we will see with this rich audio medium, one thing’s for sure; there will be more podcasts…so many more podcasts.